Deciphering the Symbolism and Meaning Associated with Lord Ganesha

In Hinduism, it is believed that all Hindu deities represent cosmic energies that are part of the Divine Universal Energy or the Supreme God-head. Lord Ganesha is called by many names to address his various abilities and qualities. As a leader of the masses, he is called Ganaraj or Ganapati and as a remover of obstacles, he is called Vighnaharta. There is a lot of symbolism and meaning associated with Ganesha paintings. In these images, the Lord Ganesha indicates man’s striving quest to be in balance and integrate with nature and his surroundings. 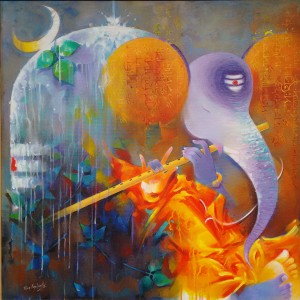 In various paintings, the Lord is depicted with a large elephant head. His large elephant head indicates that the Lord rules the intellect (Buddhi). It also symbolizes auspiciousness, strength and intellectual prowess. Also, in every Ganesha painting, he is shown with large ears. As the leader of masses, the Lord listens to everyone’s prayers, requests, and pleadings. Also, the winnow like ears sifts the good from the bad. His small eyes indicate the power of concentration, which is one of the attributes as well as expression of a well-developed intellect. His small mouth indicates reservation in speech i.e. the Lord is more action oriented and would rather do than speak. The trunk of Lord Ganesha represents flexibility. It also indicates discrimination ability of the good from bad. Proper discrimination is the most important quality of a well-developed intellect. The sweets (modak) depicted in Ganesha paintings indicate reward and blessings of offering prayers and conducting a spiritual practice. They also symbolize the sweetness of a realized inner-awakening. In most paintings, a prayer offering (prasad) is usually shown near the feet of the lord. It indicates that the entire world is at its feet for asking. His large stomach indicates his enhanced ability to assimilate, i.e. digest all the good and bad of this world.

In most spiritual Ganesha paintings, the lord is shown with four arms. His one hand is usually in the mudra of giving the blessing. In the second hand, he holds sweets. In the third hand, he holds a noose, indicating that the worldly desires are a noose which prevents a man from obtaining the supreme bliss of an inner-awakened self. And, in the fourth hand, he holds the elephant goad through which he prods man to follow the path of supreme self-realization. Using the goad, he strikes and repels all obstacles and obstructions. In most Ganesha paintings, a serpent is shown tied at the waist of the deity. In its negative connotation, a serpent represents the desires which the Lord helps control and curtail. In its positive connotation, the serpent represents the Kundalini energy. As a Sidhhi, Ganesha has accomplished and mastered Kundalini energy.

These are some of the most common symbolism and meanings associated with Lord Ganesha.

Need Help For Your Business? Consult the Techies at Social Media!