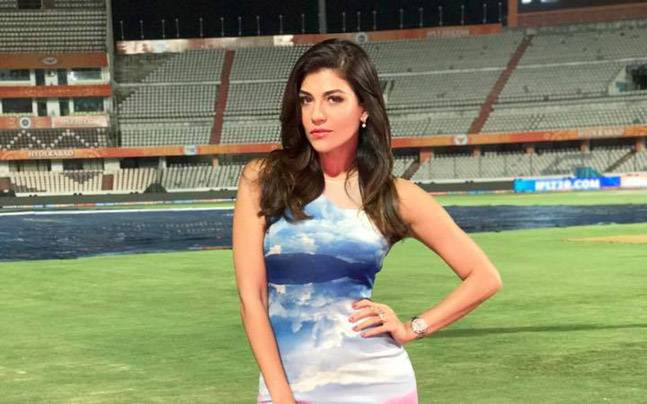 he Indian Premier League has given great exposure to the players and the fans of cricket.  The reason behind this must be the fact that it brought the international stage to India. These seasons have added more glamour to the sport and cricket fans all over the globe. Not only the players but the female anchors are too making the famous and biggest league a hit. These “Beautiful IPL female anchors” set the stage on fire. Their fluent command of communication skills and knowledge will make you dumbstruck. Some of the most beautiful female IPL anchors list is mentioned in the article below.

1.Shonali Nagrani- Shonali was born on 20 December 1981. She is an entertainment television presenter and IPL female anchor. She has hosted IPL for four consecutive years. In 2003 Shonali was crowned Femina Miss India International, where she was the 1st runner up. Nagrani was also a contestant of the reality show Bigg Boss in 2011.

3.Roshni Chopra- Roshni is counted in the Beautiful IPL anchor list. She is an Indian actress, model, and Television presenter.

4.Karishma Kotak- Karishma was born on 26 May 1982.  Kotak started her career in Modelling and advertisement in the UK than in India. In 2004, She appeared in a few music videos called Me Against Myself. Similarly, she was also seen in songs like “Oscar”. Karishma was a part of IPL T20 2013-season 6.

5.Nashpreet Kaur- Nashpreet Kaur popularly known as Nashy is one of the most beautiful IPL female anchors. She is an Indian -Australian model born in Fijji.

6.Sanjana Ganesan- Sanjana is 28 and she did her schooling and college from Pune. She has been a part of many shows like MTV Splitsvilla season 7, Femina Style Diva, etc. In 2019, Sanjana hosted the Cricket World Cup, and, she is one of the gorgeous IPL female anchors.

7.Archana Vijaya a.k.a Starchie-Archana was born on 17 November 1982. Her nickname is Archie and Starchie. She is a Model, TV, and Sports Anchor. Vijaya hosted IPL 2020.

8.Pallavi Sharda- Pallavi joined the IPL as one of the new anchors for the Extra innings T20. She was born on 5 March 1988 in Perth, Australia, and spent most of her early life there.

9.Saumya Tandon- Saumya was born on 3 November 1984. She is an Indian television and film actress, host. In 2006, she was the Femina Cover Girl First Runner Up. Tandon has hosted many Tv shows like Zor Ka Jhatka, Dance India Dance for three seasons, Bournvita Quiz, etc. In 2015, she was featured as Anita in India’s most popular comedy serial Bhabiji Ghar Par Hain! Popularly known as “Gori mem” she is one of the finest IPL female anchors.

10.Tanya Purohit- Tanya was born on November 9, 1991, in Uttarakhand. She was just four when she decided to get associated herself with theatre. From playing the role of “Manju” in the movie NH10 to Terror Strike Beyond she is one of the most beautiful IPL female anchors we have.

For all the IPL Anchor’s and celeb’s bio or latest images must-visit TechCraftie.Com