Experience The Best Of Agra Tourism With the Maharajas’ Express

Very few monuments in the world can match up to the beauty of the white marble mausoleum that was built in the 1640s in the bustling city of Agra, India. The backstory of Agra tourism is as intricate as the weaving streets of Agra itself, starting with the untimely death of Mumtaz Mahal, who could not survive the delivery of her daughter, leading to Shah Jahan, the Mughal emperor at the time, to commission his monument of love in her memory.

Through the ages, this Wonder of the World has stood the test of time by being the prime draw of Agra tourism and more so by again being included in the Modern Wonders of the World list, with its beautiful carvings and spacious interior that houses faux sarcophagi of the emperor and Mumtaz Mahal. The structure is recognizable the world over, with its four minarets helping to bring the dome into focus as the central attraction. While the hoi polloi visit the Taj Mahal only for clicking the touristy pictures, the Maharajas’ Express clientele gets the lavish treatment of finessed Agra tourism, with a champagne breakfast served atop the regal Taj Khema. Indeed, Shah Jahan himself would have been envious of the setting and the comforts!

Imagine the labor of the craftsmen as they gave shape to their ruler’s vision. The Taj Mahal is, without a doubt, a massive structure, comprising not just the splendid domes and minarets of the main attraction of Agra tourism, but also the Great Gate through which one first gets the famous face-on view of the cenotaph. Two red sandstone structures balance out the white shine of the Taj Mahal, lending aesthetic value and serving as mausoleums to the emperor’s other wives.

In sight of the Taj Mahal, along the banks of the Yamuna, lies the historically venerated Agra Fort, itself another UNESCO World Heritage Site on the Agra tourism circuit. This fort has acted as the base for many significant historical rulers, especially of the Mughal dynasty. Its place was cemented – no pun intended – in history when Akbar, arguably the most famous Mughal emperor, reclaimed it from Hemu and made Agra his capital. His successor, Shah Jahan, erected the Taj Mahal later, and is believed to have spent his last years looking at his architectural ode through the windows of this fort.

The fort is humongous, and it takes brisk walking to cover all of it before you get tired, as there is lots to do on the Agra tourism itinerary. Advisories for Agra tourism include water (in transparent plastic bottles), sunscreen and a knowledgeable guide who will not rip you off. The Maharajas’ Express protects you from such fallacies with their professional staff, who are always at hand to answer any queries you may have, from the historical to the practical.

Fatehpur Sikri is the other major place of interest included in Agra tourism. Its name is a combination of ‘fateh’ (victory), ‘pur’ (city) and Sikri (a mispronunciation of ‘shukriya’, meaning thanks). The first part is attributed to Akbar’s victory in areas now in present day Gujarat, while the Sikri part comes from Babur, the first Mughal emperor. As such, it is highly planned, with a version of the Jama Masjid as well as the tomb of Chisti near it, giving the small town a place on the UNESCO World Heritage Site list, along with Agra Fort.

With so much to soak in, it is no wonder that people brave the sun to walk in the footsteps of the Mughal emperors and their armies by experiencing the heritage that makes up Agra tourism! 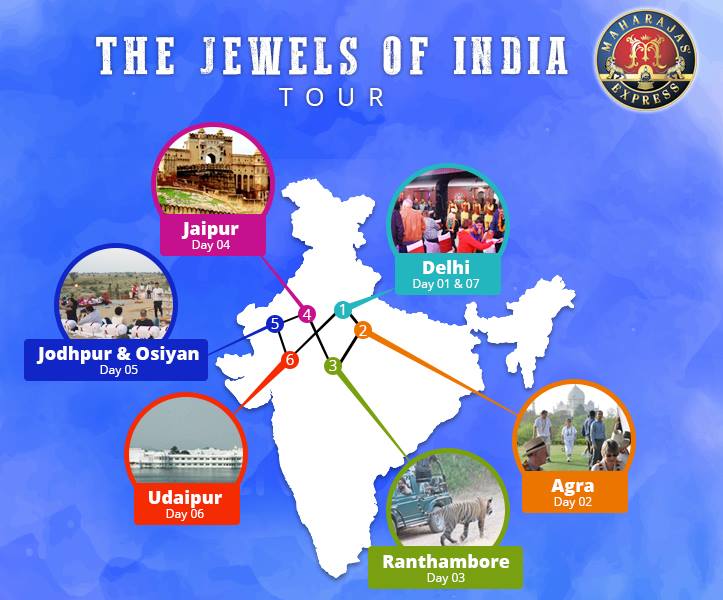