How to dominate your opponents in the game of online rummy

Entertainment by Saamya Sharma on May 8, 2018 add comment 570 views

Although the game of online Rummy is one of the simplest ones to learn, as it appears, it cannot be won unless a player is acquainted with all its nuances. Without understanding them properly, it is impossible for any player to dominate the game. It is a very calculative game which requires certain unique skills in addition to possessing utmost concentration and focus. Let us now see how one can dominate his opponents in the game of online Rummy.

As soon as a person decides to play online Rummy, he has to first know the rules to the fullest. For that, he needs to extensively go through all the video tutorials published by the Rummy sites. These tutorials will guide any newcomer very closely as to how to play the game and how to counter tricky situations when they arise. Also, a person must perfect himself by playing many practice matches before going for cash tables. These practice matches can be played by him till he gathers enough confidence to promote himself to play online rummy cash game. Anyone who follows this procedure meticulously is sure to achieve greater success as an online Rummy player. 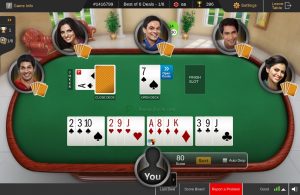 The objective of online Rummy is to form at least two sequences one of which must be a pure sequence. Therefore, as soon as the cards are disbursed to him, the player needs to ensure that he has formed the pure sequence first. A pure sequence is nothing but a formation of consecutive number cards of one particular suit without the usage of joker. If this is achieved, he can concentrate on forming other sequences and sets.

The biggest challenge that any Rummy player faces is confronting bad Rummy. A bad Rummy is nothing but having complicated cards not easier to form a pure sequence to start with. So when such a situation occurs, he should do the following things immediately so that he does not lose a deal badly.

Interesting Blog -   How to promote your old song

In addition to playing his cards well, a player should be able to confuse his opponents by playing mind games. For example, a player, when he is in a fix, should try to confuse his opponent by drawing cards from the open deck on four to five consecutive turns. This will make your adversary think that you are very close to finishing the game and so in a hurry he would drop his own game immediately.

You can also continuously discard cards of lower values on every turn of yours which will again confuse your opponents to fold the cards. This is because normally higher cards are discarded by players and by discarding lower cards you are giving a deceiving hint to them that you are on the verge of completing the deal. So, this is another strategy with which you can win the game.

And last but not the least, a player has to know how judiciously he should use the joker cards -both printed and random jokers. More often than not, the joker cards come as a saviour for any Rummy player. When you know how to use them properly, you will always stand on the verge of victory, no matter how delicate your position seems to be in.

Nutriglow Facial Kit An Incredibly Easy Method That Works For All

Book Online The Most Accessible Hotel in Hong Kong