Visit and Live through the Golden Ages of the Chittorgarh Fort 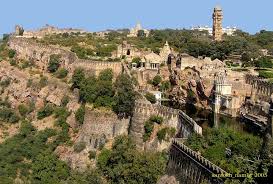 India is a land of diverse culture and beautiful landforms. It has always been considered as one of the most favored tourist destinations across the globe. People from different parts of the world come here to explore this exhilarating and beautiful country. India is well-known for its graceful monuments and structures. Built over by different rulers of India years back, there are hundreds of historical monuments present in different parts of the country. Among different historical monuments, Chittorgarh Fort is popularly known for its own beauty.

Chittorgarh Fort is located in the state of Rajasthan and is being considered as one of the largest forts in Asia. It is approximately 500 feet high and the total area covered by it is around is 700 acres. It was the capital of the Mewar which was previously ruled by the Guhilot, later by Sisodias and the Suryavanshi clan of Chattri Rajputs.

Let’s have a quick glance at key attractions at Chittorgarh fort:

It is the modern structure in Chittor which was constructed in the early 20th century and was the home for the Maharana Fateh Singh, the ruler of Chittor who passed away in 1930.

This beautiful complex was constructed in the year 1450 for the prince of Chittor. Interestingly, it is made up in the Rajputana style and is designed in S arches. Since, it’s been the palace of the prince it had been exclusively constructed with the attractive blue tiles.

This royal palace is basically constructed as white building and is three storeyed. The complex that you will see today is actually the renovated form of the original one. The palace of the Rani Padmini is hemmed in with water. There is also a magnificent and attractive crown on its top. Near by the palace there is the Bhimlat kund, an artificial pond which has been made in the name of the toughest of the Pandava brother, Bhima.

These are two buildings in the palace of Chittor Fort. Relatively to other palaces in Rajasthan, it doesn’t possess any architectural significance. If you move towards the south direction of the palace, there you will find the Chonda house which was constructed in the 15th century.

A prehistoric Tulja Bhawani temple is located at the western side of the fort and is devoted to the goddess Tulja. There is a courtyard, that is, tope khana which is situated next to this temple.

It is a small fortress which was built by the Rana Kumbha and was the capital reserve of Chittor.

This temple was built by the Rana Kumbha in the honor of the saint poetess, the devotee of the Lord Krishna, Mira Bai. It is one of the oldest memorials of Chittor. Adjacent to the temple there are two kunds or artificial lake which measures around 125 feet in length, 50 feet diagonally and 50 feet deep.

It was built in 8th century in the honor of the Surya, the Sun God. Allauddin Khilji has previously demolished the temple; however it was again reconstructed as the Kali temple in 14th century. In this temple, there are five chambers which exclude the original roof.

This tower had been termed as the Tower of Fame. It was built in the honor of the Adinath, the first Jain Saint. It is approximately 75 feet high and 39 feet wide at the base.Hence, if you get time to visit Chittorgarh Fort, then don’t miss the chance to explore this historical monument and see through the great history of the state.

Education System in Rajasthan Is Expecting to Touch National Averages

Is Windows VPS Hosting the right solution for my business?