Are you Charging your Phone Right?

Technology by Kelly Bell on May 16, 2018 add comment smartphones 252 views 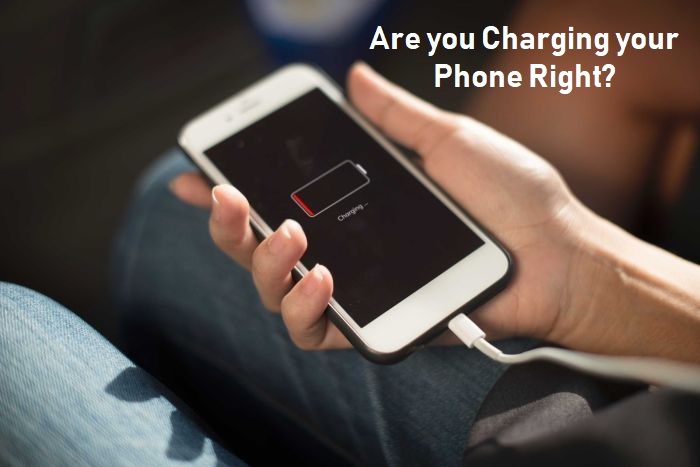 Phones are our alarm clocks in the morning, guide during the day and a source of information, throughout. We can’t think of completing a task without the help of smartphones. With such a heavy requirement of phones in our lives, the battery of a phone has to have a performance that matches up to the usage as well. And that is what this article talks about, which is how you can charge your phone right so that it doesn’t give up on you and can function to its complete potential.

Phones should not be charged overnight! Charge phone only when it has hit the red mark! These are some of the many things that we have heard since forever now. While this is true that eventually a phone’s battery fades away and its lifespan decreases as well, but the process can be slowed down if charged in the right way. It is time to come clean with what should and should not be done with your phone’s battery to extend its lifespan.

There are a few things that you can do to make your phone’s battery last longer than it is supposed to be by charging it in the right way:

We all have heard you need to do a full charge and discharge when your phone is right out of the box but this is not the case with the modern batteries. The thing that actually matters is how you charge your phone. Basically, you should prefer shallow recharges and discharges in comparison to full ones since they put less stress on a phone’s battery. Whenever you see your phone getting discharged, all you have to do is let it reach 50 percent before topping it once again.

Avoid pushing your phone’s battery to a 100 percent. And even if you do fill it up till 100, don’t forget to take your device out of the charging point. Although this method has nothing to do with safety but with the fact that in long-term, electronics generally age faster if they are constantly plugged in while they are already charged up to a 100 percent. Although this shallow discharging and recharging method will work just fine, you can also, every once in a month, let your phone hit that 5 percent before you recharge it again. This mechanism allows your phone to give you an “estimated battery time remaining” reading which is somewhat accurate.

Storage and other factors:

One of the major things that our phone’s batteries cannot tolerate is extreme temperatures. So in situations like hot cars or chilly areas won’t really do good to your battery’s life. Similarly, while charging a phone, it is advised to avoid overheating it after it is fully charged.

As another precautionary method, always use the charger that your phone came with. This will be a guarantee that your charger is safe to use with your phone’s battery and is also optimized to charge it as efficiently as possible.

A few pointers to keep in mind are the ideal charging number is somewhere between 65% and 75%. The second best range would be starting from 45% to 75% which is more feasible for people these days. Also, don’t always aim for a fully charged phone. Instead, charge wherever and whenever you find a plugin point. Little goes a long way in this case.

Although these pointers will help in increasing your phone’s battery lifespan, it is also advised to go for a phone that actually has a long-lasting battery backup in itself. Because no matter how much you try to charge your phone right, the better and the permanent solution is to look for a phone which has, in fact, a large battery backup. Phone companies like Panasonic India Smartphones, OnePlus, and Samsung have some of the best battery backup devices.

So the first step is to always buy a phone that has a good battery backup in itself and even if doesn’t have that much backup, then the second step would be to follow everything in this article and this will surely improve your phone battery’s lifespan.

7 Tips to create your band brochure for getting gigs